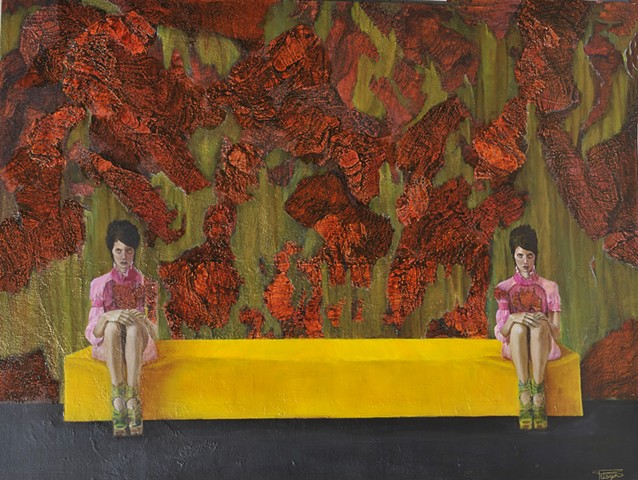 The space we live and breathe in should be an inspiration. It should enhance our day to day lives. That is why I love what I do. I get to be a part of that for someone else. I am able to see what happens to someone when they have been inspired. It's a beautiful thing.

Life happens at me and I react.

Our dysfunction is only as dark as our secrets.

This was my story. My script. I had no idea at the time but this painting was the start of a life retold. The chapters were murky from my dysfunction, my normal, my paradigms, my examples. The tools I learned to navigate through life were fight, flight or detach. I learned at a young age that detachment was my favorite because I could fight and flight in the safety of my own home. My head.

As I grew older, I told people about my life almost in third person. I thought about it one day and I realized I would visualize myself as the child while telling my story as if it was it was someone else. It caused a massive void in me creating two different people, my younger self and my adult self. One was the carrier of my shame and the other a more acceptable version.

I sat with that for awhile. I could blame the trauma and drama I saw as a child, society, the weather, the ex boyfriend, social media, divorce, alcoholism, abandonment, government, presidents, climate change, TV, generation x,y,z, the 70’s,80’s,90’s and my favorite one…. Myself. I would replay me as an 8 year old trying to rationalize the things happening around me. Telling myself I better toughen up. I specifically remember the moment in my 8 year old head when I became an adult. I was responsible for all the right and wrong that happened to me. I was in control and I was to blame.

That determined that I did not believe in the Sovereignty of God.

The Sovereignty of God is the biblical teaching that all things are under God's rule and control, and that nothing happens without His direction or permission. God works not just some things but all things according to the counsel of His own will (see Eph. 1:11). His purposes are all-inclusive and never thwarted (see Isa. 46:11); nothing takes Him by surprise. The sovereignty of God is not merely that God has the power and right to govern all things, but that He does so, always and without exception. In other words, God is not merely sovereign de jure (in principle), but sovereign de facto (in practice).

The truth is I do believe in the Sovereignty of God. I also believe in choice. I don’t understand how it all works but that is the mystery I have to accept.

"Faith is not a leap in the dark; it’s the exact opposite. It’s a commitment based on evidence… It is irrational to reduce all faith to blind faith and then subject it to ridicule. That provides a very anti-intellectual and convenient way of avoiding intelligent discussion.” ~ John Lennox

John Lennox said faith is not built blindly.... It's built on actual events. What the Lord has shown me in spite and through my life events can only be that there is someone at the Control Station that we call Life.

In Job 1:8 The Lord says to Satan “Have you considered my servant Job? He is blameless and upright, a man who fears God and shuns evil.” Satan answers “Have you not put a hedge around him and everything he has?” Satan tells the Lord, “Stretch out your hand and strike everything he has, and he will surely curse you to your face.” Job 1:12 The Lord said to Satan, “Very well then everything he has is in your hands, but on the man himself do not lay a finger.” Not only does the Lord allow Satan to take all of his wealth, family and health but his friends are trying to get him to admit he did something to deserve it. You see Job didn’t, from what we can tell, make bad decisions when it came to money, his health and business. There are consequences for bad decisions but that is not what is being told here. The devil challenged God and said watch what happens to your precious son if I take it all away, he WILL turn from you. But God knew his son Job. He said ok but his actual "life" is off limits. He is to be kept alive. God never says in the end exactly why he let Job go through all of this but I have to wonder if it was two reasons.

1. To show Job himself just what he was made of. That he did have faith. That the Lord was in control meaning He is sovereign and that Job did in fact did believe his own doctrine. Job did have a choice in all of this…Was he going to react, blame and ultimately become bitter OR respond and believe which leads to worship?

2. To prove Satan wrong. Not so He could make a point in the way we make a self-righteous point in our humanness… He is God. He does not answer or take threats but to prove to us, as the reader, that if we are his children He fights for us?

So I have to wonder... Did Satan have a script he would read to me as a child? Did I believe it? I’m sure whatever he told me as a kid had a touch of truth because those kinds of lies are the easiest to believe. After awhile I lived out the lies because I believed them. The Lord had a script for me also. I believe the Lord said, “Satan go ahead. I will allow it and it will do nothing but strengthen her faith in me! I know her story because she is mine and I have whispered truth to here for the last 36 years during her quiet times when I didn’t allow you in. I made her a warrior and she is going to show you what she is made of. I am about to convince her of it also.”

Choice and Gods Sovereignty? I have a choice to react at life. Become bitter and blameless in my own eyes which could lead me to be angry at the Creator. Or it can teach me to respond with life. To believe that He can help bring these two people back together as one. The shameful little girl and the woman loved by her God. I believe to show me how to love others and be loved by Him. Also I am reminded I am not in control. He is. When I believe that, only then I can live as I ought. Chosen and Loved by Him.

You see if we don’t truly believe in Sovereignty, it’s all choice and a cruel game of Russian Roulette then when we succeed it’s all about what we did and when things don’t go as planned we blame God which leads to a life full of self inflation and/or bitterness. Both destroy.

A perfect map drawn up by the devil himself leading straight to the pit of despair. Which is also called laying in bed at 3:00 in the morning wondering “Is this all worth it?”.

When I started this painting I had no idea the direction it would take. The back wall is finished in snake skin which is the symbol of deception. It is starting to ooze into the girls hearts. Out of the heart flows all good and bad. If Satan can deceive the heart he feels as if he has won. Sometimes he does. The couch is life, evoking a feeling of a cataclysmic void within close quarters. Myself. Lastly the two girls are the two people in all of us. One of them represents the shame and the other the facade built for the outside world. They both want freedom, which only comes when we make a choice to dance with Gods Sovereignty and respond to whatever that is, all the while making choices along the way in the voice of Truth. © ERIKA TIESZEN WEBSITE BY OTHERPEOPLESPIXELS